There had been a very large buzz around town about the Dope, Static-X, and Powerman 5000 show at the Palace. The first night sold out soon after tickets went on sale, and after adding a second night, that one sold out as well. KROQ did a fairly decent job of promoting the event. However, rumor has it that they neglected to mention Dope and Static-X in the majority of their promo spots. This is a shame, because a lot of the time, with a line-up this good; the foreplay can be just as hot as the climax.

Dope hit the stage soon after 8:00 P.M. and played to a typically “jaded” Hollywood audience. The lights went down with a roar of enthusiasm from the crowd, and the guys took the stage like the rock stars they are, but something in the material just seemed to be lacking what it took to get the audience members to move. The stage persona of this band is polished and sexy, and the songs are very decent, there was just something missing that I couldn’t quite put my finger on. This isn’t to say that they didn’t do a great job of getting down, because they really did.

This is the second live show I’ve seen them play at the Palace and I recently bought the CD, ‘Felons and Revolutionaries‘. I really think they deserve a fighting chance. Plus, they do a pretty cool cover of ‘Fuck tha Police‘, so they have to be doing something right. Perhaps once they come into their own groove a little more, and they steer away from the very Manson-esque mannerisms in their vocals and their moves, we’ll see where they go. More power to the boys in Dope in the future.

The Static-X set began with a bit of a psyche out. There were technical troubles that halted their stage entrance, which got everyone excited, then cooled off, then heated back up with angry anxiety. Ken struggled with his drums while Jane’s Addiction played over the Palace sound system in a feeble attempt to calm the waiting mob. Once things were in order, Static-X arrived and began to dominate immediately. It’s very difficult to stay still during one of their performances, let alone when you’re listening to the CD. This show was no different.

Static-X truly rocked and they rocked hard. The band pounded out their own brand of ‘evil disco’ complete with wicked grins and furious grooves. Koichi, I have decided, is the ‘Dance Master’; Ken is the obvious; he’s the ‘Ken Doll’. Tony holds firm with the hardcore element and Wayne? Well, let’s just put it this way, he’s a mixture of all of those things, and that wicked grin comes directly from his lips to yours. I just can’t help but smile when he does that thing he does. He’s a bad ass. 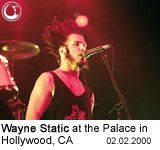 My favorite tracks were ‘The Trance Is The Motion‘, ‘I Am‘, and ‘Push It‘ but they played a total of 11 songs that kept everyone moshing, moving, crowd surfing, and singing along with every word. I won’t give it all away, but let’s just say that Burton C. Bell of Fear Factory helped the Static guys out on ‘Burning Inside‘. Static-X played a great set. I can’t wait to see them again.

Powerman 5000 were the guests of honor on this evening, and that was plain to see by their massive and impressive stage set up. It looked as if you had literally walked right in to a high-tech comic book. I remember seeing them play one night at the Whisky when they were supporting “Mega Kung Fu Radio” and they were colorful then. But this show is a completely different and largely improved step in the right direction since those days. The lighting and the set were visually very entertaining as it was; then the band takes the stage, it’s kicked up about 5 notches.

Spider‘s voice has improved in a big way. The band’s songwriting has gotten groovier, more creative, and at the same time, they’ve become a tighter and more solid unit performance-wise. The lengthy 19-song set included tracks from their first release, as well as several scorchers from the new CD, “Tonight, The Stars Revolt!” The first single ‘Nobody’s Real‘ hit me over the head the first time I heard it, and I’m sure everyone must have felt the same way when they heard it last night. That song rocks as does ‘Automatic‘. I lean towards the ‘old school’ Powerman songs, personally, so when they did ‘Car Crash‘, and ‘Neckbone‘ (another favorite of mine) I was appreciative.

They were also really fun to watch. Spider has always had this “Worship Me!” sense of self-assurance about him on stage, which comes off really well. And I have to say, that the costume designers and stylists for Powerman should be commended for making all of the guys look hot. It’s obvious that a lot of people have a hand in the presentation of this band, and these days, it’s kind of refreshing that a sense of style and showmanship still exists within live performances. This has always been an important element to a Powerman 5000 show. You get what you pay for when you see them.

Rest assured, a great time was had by the majority, if not all of us, that were in attendance on the first night of the two show dates. At a show like this one, you would have had to try pretty hard to not have a good time.

Very special thanks to Kristine at MSO for bringing me out to the Palace on a moment’s notice.

When I first heard the song 'Soluble Words', being a huge God Lives Underwater enthusiast, and a Failure fan for...